Now, in this time of heightened tensions, the United States and other members of the international community rightly saw this as a dangerous and irresponsible, and as I’ve said before, an unnecessary step. Both the United States and Russia have long agreed that nuclear employment could have devastating consequences, and we both agreed, most recently this year in the context of the P5 statement, that a nuclear war cannot be won and must never be fought.

Then, Kirby went on to reveal that the U.S. had postponed the missile launch test:

Such provocative rhetoric and possible changes to nuclear posture involving the most consequential weapons in our respective arsenals is unacceptable. The United States has not taken any similar steps. And so in an effort to demonstrate that we have no intention in engaging in any actions that can be misunderstood or misconstrued, the secretary of defense has directed that our Minuteman-III intercontinental ballistic missile test launch scheduled for this week to be postponed.

The press secretary said defensively that the postponement was “to demonstrate that we are a responsible nuclear power.”

“This is not a step backward in our readiness, nor does it imply that we will necessarily cancel other routine activities to ensure a credible nuclear capability,” Kirby continued. “We remain confident in our strategic posture, as we’ve said before, and our ability to defend the homeland and our allies and partners remain fully intact and ready. We recognize at this moment of tension how critical it is that both the United States and Russia bear in mind the risk of miscalculation, and take steps to reduce those risks.”

Later in the briefing, the press secretary reiterated, “I’d say this delayed test is not affecting our strategic nuclear posture and our deterrence, it’s just not. It’s not canceled. We’re just moving it to the right a little bit. And I won’t talk about the specifics of our deterrent posture except to repeat what I’ve heard the secretary say many times, that he’s confident, that he’s comfortable that the strategic deterrent posture that we have in place is — is up to the task of defending the homeland, and our allies, and our partners.”

Kirby later stated that the Biden administration did not “have a rescheduled date right now.”

When questioned about what would occur if a Russian flight attempted to approach U.S. airspace, Kirby stated: “Without getting into specific hypotheticals, NORAD is perfectly postured. This is the mandate for NORAD to protect our homeland, North American homeland and airspace and they’re ready to do their contribution to the President’s order. I think I just need to leave it at that.”

“The Minuteman III makes up the Unites States’ land-based ICBM of the nation’s nuclear triad, along with the Trident submarine-launched ballistic missile (SLBM) and nuclear weapons carried by long-range strategic bombers. It is a strategic weapon system using a ballistic missile of intercontinental range. Missiles are dispersed in hardened silos to protect against attack and connected to an underground launch control center through a system of hardened cables,” The Daily Mail explained.

Dems Try To Push Another OUTRAGEOUS Bill For 'Gun Control'

Pictures of This Mind-Boggling Structure Have Gone Viral

Is this Bridge even real? Pictures have gone viral showing a double-deck glass bridge in China. The bridge has a…
byStaff Editor 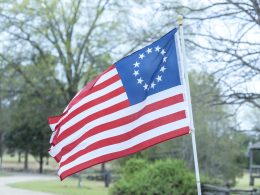