Former President Donald Trump has come out and set the record straight about Florida Governor Ron DeSantis after the mainstream media’s latest attempt at a smear campaign.

After Governor DeSantis was absent from Donald Trump‘s rally in Sarasota, Florida, Democrats and their allies in the mainstream media are attempting to stir up baseless claims of a rift between Trump and DeSantis.

Trump has since refuted these claims, revealing that he and DeSantis had mutually agreed that the governor would not be at the rally because there is a lot of work to be done in Florida at the moment.

The former president noted that DeSantis was busy focusing on the risk of a tropical storm in Florida, alongside the work that still needs to be done in relation to the building collapse at Surfside. Governor DeSantis has maintained his dedication and commitment to helping the community that has been effected by the tragedy, and spent the 4th of July at the site of the collapse.

“Thanks to the leaders of the Florida State Legislature, @ChrisSprowls and @WiltonSimpson, for accompanying me to the Miami-Dade EOC and Surfside today, and for supporting our response efforts,” DeSantis tweeted.

Thanks to the leaders of the Florida State Legislature, @ChrisSprowls and @WiltonSimpson, for accompanying me to the Miami-Dade EOC and Surfside today, and for supporting our response efforts. pic.twitter.com/woNF2NwT6W

President Trump praised DeSantis for working very hard for Florida, asserting that the governor had every reason to skip the rally. From DeSantis’ announcement about the work that was being conducted during the time of the rally, it appears that Trump is correct.

“We’re preparing for the risk of isolated tornadoes, storm surge, heavy rainfall and flash flooding. The state has begun executing contingency plans for the tropical storm Elsa and Surfside Co. response,” the governor said. “I want to thank all the first responders on site and Surfside and everyone here in the EEOC that is preparing for the storm.”

The left and the mainstream media can try as hard as they want to create a rift between the two possible 2024 GOP candidates, but it doesn’t appear that they will succeed.

Heads are shaking in rueful acknowledgment across the Indiana GOP today. What has long been suspected by many…
bySandy Ravage 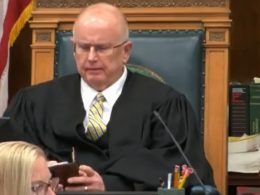