Arizona Senate candidate Blake Masters has taken the lead in the state’s Republican primary race for the first time. Masters has spent much of the race stuck in third place, but having finally received his anticipated endorsement from former President Donald Trump, the Peter Thiel protégé has finally been able to propel himself into the lead and is now the apparent favorite. The race is one of the year’s most important, and attention will increase as the August 2 primary approaches.

We predicted that Blake Masters would get the Trump endorsement after J.D. Vance earned his in Ohio; the two Republicans are closely aligned and Trump seems to have a real interest in their brand of conservatism.

As expected, Masters now has his endorsement from Trump, and just like Vance he is putting it to good use. Like Vance, the Arizona Republican is using this development to slingshot his campaign into first place and provide new momentum for the home stretch.

Vance, Masters, and Missouri Senator Josh Hawley all come from the same sphere of Thiel-funded Republicans interested in taking the party in a new direction.

Trump has gone against the wishes of close allies and former staffers to support this new wing of the GOP, and he has not been disappointed yet by the results of his gambles.

Vance and Masters have both run strong campaigns that needed only an extra push to propel them into the lead, a push that Trump has been able to provide in both cases.

The former president has proven to be incapable of single-handedly securing victory for a flailing candidate like David Perdue in Georgia, but his influence has been decisive in empowering otherwise strong candidates like Vance and Masters.

The presumptive Arizona nominee has been largely free from controversy, though attacks from both Republicans and Democrats have surfaced throughout the race.

Much has been made of a recently emerged video in which Masters blamed black people for disproportionately contributing to gun violence in America.

It is unlikely to hurt his prospects, at least when it comes to securing the GOP nomination. Violent crime being a problem in black communities is hardly a surprise to most Republican voters, and if anything many will find it refreshing that a candidate is willing to be politically incorrect in responding to the nationwide crime wave.

Only a very small percentage of Arizona voters are black, but the comment may still hurt Masters in the general election with independent voters. By that point, however, the “scandal” will be old news.

To Republican voters at least, Trump’s endorsement will be more than enough to outweigh the impact his remarks on violent crime could have on undecided Arizonans.

Another scandal could always emerge unexpectedly, but for now Blake Masters appears to be very well positioned to secure the Republican nomination and challenged Democrat Mark Kelly in November

Support for the Biden administration continues to crumble as yet another prominent Democrat has flipped on Joe Biden.…
bySandy Ravage 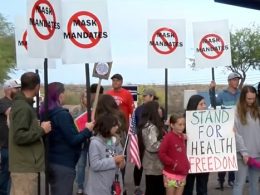