Chair of the Congressional GOP Conference Rep. Elise Stefanik (R-NY) has come out swinging with a dire warning for House Speaker Nancy Pelosi and her Democratic-Socialist retinue. The New York Republican has put her opponents on notice that Pelosi’s time as Speaker is nearing an end, and that her electoral downfall will be at the hands of Republican women retaking the majority in the US House of Representatives. In the upcoming 2022 election, only six seats are needed to flip the House back into Republican control, making a return to power extremely unlikely for the 81-year-old California Democrat.

Pelosi On Notice: And Not By the Hand Of Man Will She Fall

Stefanik told the gathered press, as she introduced the eight new Elevate PAC or #EPAC 2022 candidates with whom she intends to spearhead this campaign,

“They thought Nancy Pelosi was going to pick up seats, when, in fact, Republicans won 15 seats, 11 of which were flipped by Republican women. We are building on that success in 2020 and have strong conservative women who are running in the 2022 election to fire Nancy Pelosi once and for all.”

“When I talk to women, and just generally voters in my district, on every single issue, Democrats have failed them.”

“Whether it’s inflation, they’re seeing that Joe Biden and Nancy Pelosi’s failed policies and reckless spending have led to historic inflation, and that hurts families the worst.”

“I’m a new mom. I have a three-month-old, Sam, and education was very important to me as I grew up, and it was something that my parents instilled in my brother and I, giving us the best educational opportunities, and that’s what I want for Sam, and I’m already thinking about that and he’s only three months old.”

“I think moms and dads want to make sure their kids get the best education possible to succeed in America and what we’re seeing is this far-left agenda being pushed through national organizations, whether it’s teaching of the critical race theory in teacher training programs or integrating it into curriculums.”

“We’re also seeing school districts withhold curriculums from parents, which, by law, they’re required to have parental engagement plans to make sure that parents are able to have transparency into what their kids are being taught in schools.” 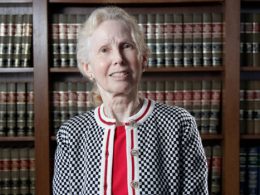