Chair of the Arizona Republican Party Kelli Ward is sounding the alarm about three left-wing operatives sent to observe the audit by Secretary of State Katie Hobbs. Rather than sending three people from her office, Hobbs chose three radical left-wing activists.

Democrats’ efforts to stop the audit have all failed, including Hobbs’ attempt to convince the Arizona State Attorney General to initiate an investigation into the audit, and an attempted restraining order, which was rejected by a Democrat state judge. Now, in desperation, Hobbs has sent in three activists to try to disrupt the audit process.

According to reporting by The Gateway Pundit:

“The Brennan Center, Protect Democracy and The Leadership Conference have signed a letter to the civil rights division of the DOJ asking them to get involved.

The arguments within the letter [pdf here] are identical to the arguments made previously by other Lawfare groups, including Perkins Coie, to a state judge. The state judge rejected the arguments because there was no evidence submitted to the court to back them up.”

One of the groups, the Protect Democracy Project, is allegedly tied to George Soros. 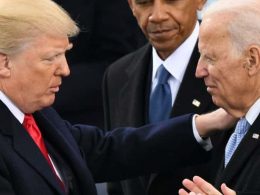 A bombshell report shows who really won the 2020 election. According to a report from election analyst Seth…
byAnastasia Boushee