Reports have exploded across the internet in the last 48 hours that audio recorded on a Georgia state government device and only obtained through a Freedom of Information Act request exonerates President Trump completely of any wrong doing. A recording of President Trump’s now infamous call to Georgia Secretary of State, Chief investigator Frances Watson on December 23rd has been released in full. The audio completely and totally debunks the slanderous, libelous claims by CNN, The Washington Post, the mainstream media and even Congressional Impeachment Managers that Trump told Watson to “find the fraud” and claiming she would be a “national hero” if she did.”

These claims were cited by leftist outlets to an “anonymous source” (read as: they were total bullshit). The audio confirms that Trump made no such statements nor any others that could be considered inappropriate for the entirety of the call. President Trump’s call and tone, especially taken into context with his call with Secretary of State Raffensperger only serves to highlight that the President was deeply concerned with the irregularities in Georgia’s process and the serious allegations of electoral fraud, furthermore he was keenly aware of all that was riding on this single state’s election.

Here is the actual exchange between President Trump and Investigator Watson which exonerates him and condemns CNN and Washington Post,

President Trump said: “I won everything but Georgia, and I won Georgia, I know that, by a lot, and the people know it, and something happened there, something bad happened,” Trump said on the call. “I hope you go back two years as opposed to just checking one against the other because that would just be sort of a signature check that doesn’t mean anything. But if you go back two years, and if you can get to [Fulton County], you are Boing to find things that are unbelievable. The dishonesty that we’ve heard from them Right? You know just good sources, really good sources. but Fulton is the mother lode you know as the expression goes, Fulton County.”

“If you go back two years or four years you’re going to see a completely different signature. But hopefully uh you know I will when the right answer comes out you’ll be praised. I mean I don’t know why, you know, they’ve made it so hard. They will be praised, people will say ‘great’ because that’s what it’s about that ability to check into and to make it right. Because everyone knows it’s wrong. There’s just no way”

Investigator Watson answered: “I can assure you that our team and the [Georgia Bureau of Investigation], that we are only interested in the truth and finding the information that is based on the facts. We’ve been working 12-16 hour days and, you know, we’re working through it. So I can assure you that.”

CNN was forced to choke down some serious crow while still trying to advance their false claims about Trump:

“Officials in the Georgia Secretary of State’s Office located a recently released recording of former President Donald Trump’s call to a state investigator in a trash folder on her device, a state official familiar with the situation confirmed to CNN.

The discovery of the call comes after state officials originally told CNN that they did not think audio of the call existed. The call added to the examples of Trump’s extraordinary efforts to push false claims of widespread voter fraud and influence Georgia election officials as they certified the state’s election results.

The audio file of the December 23 call between the former President and investigator Frances Watson was discovered as the Georgia Secretary of State’s Office responded to a public records request. The personal familiar spoke with CNN on the condition of anonymity to describe the internal process.”

The Washington Post Correction Read as follows (Courtesy of DailyWire) and is a far more honest assessment of the call,

“Correction: Two months after publication of this story, the Georgia secretary of state released an audio recording of President Donald Trump’s December phone call with the state’s top elections investigator. The recording revealed that The Post misquoted Trump’s comments on the call, based on information provided by a source. Trump did not tell the investigator to “find the fraud” or say she would be “a national hero” if she did so. Instead, Trump urged the investigator to scrutinize ballots in Fulton County, Ga., asserting she would find “dishonesty” there. He also told her that she had “the most important job in the country right now.” A story about the recording can be found here. The headline and text of this story have been corrected to remove quotes misattributed to Trump.”

You can find the full audio of the call that exonerates the President below. 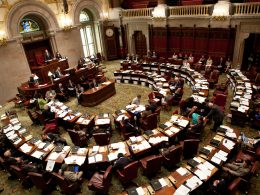 It was the equal and opposite reaction, it was an act of Newtonian political physics, it was inevitable.…
byMatthew Holloway